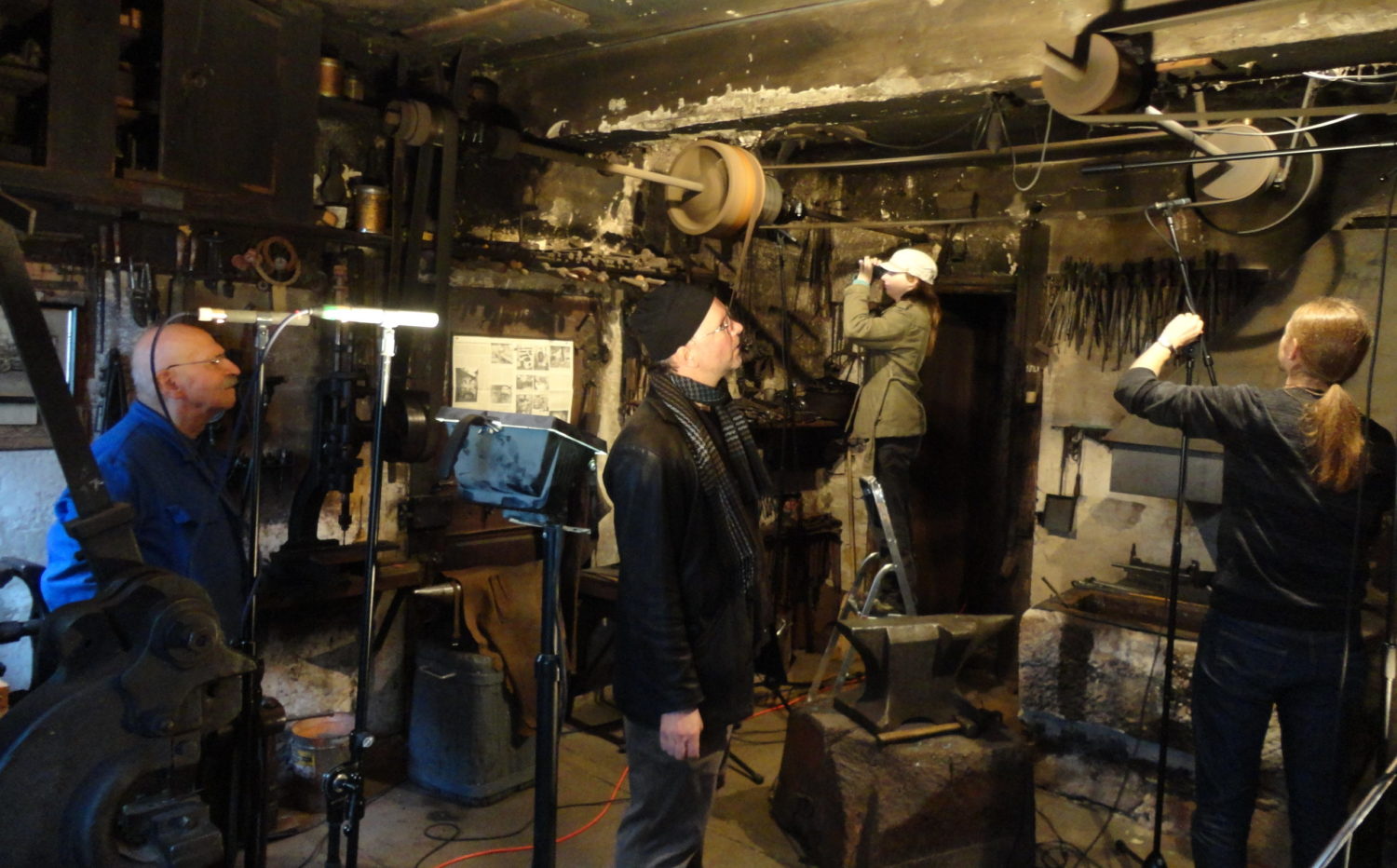 ..and how it became the topic of our next audio/visual composition “Treibenreif”:

Shortly after moving to the Klettgau, a remote valley on the northern Swiss border, we were wandering around our idyllic medieval village of Neunkirch when we first bumbled upon the old blacksmith shop. As chance would have it, the door was open and we entered into what seemed to be another world entirely. This was our first encounter with Erwin Ühlinger, a diminutive octogenarian sporting a moustache and workman’s overalls, who welcomed us heartily into the old smithy. It was then that we learned of Hermann Ühlinger (no relation) and his untimely demise.

The blacksmith shop itself is housed in the first floor of a seemingly ancient row-house on the high street of Neunkirch. Stepping into the darkly lit chamber of barely 4 meters by 6 meters, we amazed at the vast array of old tools, coal fired open furnace, and delicately aligned wood and leather contraptions hanging from the ceiling amongst the cobwebs, dust, and peeling black paint. We soon learned from Erwin that the smithy was hundreds of years old having passed from generation to generation of masters and apprentices with the whole story ending abruptly in 1948.

As the story goes, old Hermann Ühlinger was busy balancing his accounts one day: his ledger still out and partially filled in with beautiful script, when he went upstairs to the apartment to have lunch. As fate would have it that was his very last meal, as he died that day. His family not wanting to have anything to do with the blacksmith shop put a lock on the door and promptly forgot about it for about the next 40 years, when they eventually sold the entire building. The new owner, family Treibenreif, the name we honor in our work, was a history buff and was thrilled at the prospect of owning, restoring, and caring for the old blacksmith shop. Unfortunately Mr Treibenreif also died shortly after having purchased the lovely old building and his wife suggested it be made into a sort of museum: where Erwin Ühlinger offered the tours of the blacksmith on select occasions.

Such was the state of things as we bumbled in one autumn day in 2012. After hearing his amazing story, Erwin explained that he (a blacksmith himself) had done *his* apprenticeship in this very workshop and explained how he arrived on the scene shortly after the entire blacksmith had been converted to electricity (it’s current form). He showed us the antique transformer hanging off the wall in the back room, flipped a switch, and in so doing: brought the entire place to life with a gentle, rhythmic, pulsing engine. The transformer drives a 5 meter shaft attached to a large wooden drum: the first transmission. The drum is connected via a leather (looped) band to two auxiliary transmissions of shorter length, each with a wooden drum and leather band held together by large steel staples. Every time the steel staple crosses over the drum a resonant CLACK is emitted. The sound of a steel nub against a wooden drum. Alone the sound of the four wooden drums clacking as the leather bands go whirring around them is a surround-sound experience of such beauty that we were instantly mesmerized.

At the terminus of each transmission is a machine: a tool of the trade powered by turn of the century electrical engineering via leather band transmissions. A drill press, a disk sander, and a 2-meter lathe make up the entire collection of industrial revolution era precision technology which we later learned was specially assembled for the production of guns. After immersing ourselves in the sights, sounds, smells, and stories of the history of the place, we left with a skip in our step and promise to each other that we would preserve this history using *our* precision technology for producing media art.

Almost two years later we had the opportunity to spend an entire afternoon and evening in the blacksmith and with the help of Stefan Huber from Silent Wave Productions were successful in preserving the sounds of the smithy in exquisite 8-channel digital multitrack recordings. At the same time we engaged the visual talents of Alia Newcombe to assist jana° in documenting the sights, movements, lights, and shadows of the workshop in high definition video and photography.  On a separate, more quiet occasion we re-entered the old world of the blacksmith shop to document some of the more difficult angles and lighting constellations with the help of photographer Nicole Zachmann.  It was at this time we learned the true age of the the giant old air pump in the back room (Blasebalg, as it is called in German) and could do some targeted sound recordings of this amazing antique blowing machine. As it turns out the old air pump is a rare occasion where one is still mounted in the same position as it was in 1875.

Armed with this treasure trove of media we set out exploring in intricate detail the video clips, the audio recordings, the still photos, and the measurements we made onsite. jana° went almost immediately to work placing these visual elements into the Hurricane video synthesizer, producing the most seminal and striking Hurricane live computer animations to date. Meanwhile I was busy studying the resonances of this bizarre chamber: the standing waves, the comb filters, and the resonant bodies of the workshop can be heard extensively in Treibenreif. All of the audio materials including (emphasizing even) the acoustics of the chamber are clearly audible in the composition.

Formally the work is a 20 minute meditation on the rhythms of the machinery composed on the day of the sessions, and performed live in the blacksmith by Jana Honegger, Alia Newcombe, and Kent Clelland (who was also directing the turning on and off of the various machines according to the score). The standing waves in this rectangular room were measured and re-synthesized digitally to produce the bass components of the final composition and comb filters were assembled matching the acoustic properties of the location which sounds much like a Indian tampura.

As we initially explained to Erwin upon our first visit that we hear the entire system as a piece of music, he related to us stories of his youth while he was an apprentice in this workshop. After a long night of imbibing in the pub up the street, he and his coworkers would go early in the morning back to work: often times with some of the night before still in their heads: and the sounds of the blacksmith turned into a musical dance. His description of them dancing and grooving to the music of the machinery as they hammered and drilled away at their projects resonated strongly with us.  We never got this image out of our heads: the musical dance of the blacksmith shop, and we strive with Treibenreif to shine a modern light onto this historic technological choreography of machinery, tradition, and Swiss ingenuity.